“It’s an awesome feeling!” Morris, of Fargo, beamed after he and Heiser, of West Fargo, topped the 76-team field in front of a roaring crowd gathered at scenic Grahams Island State Park.”I’ve had a lot of top 10s but have been looking forward to winning one for a long time.” 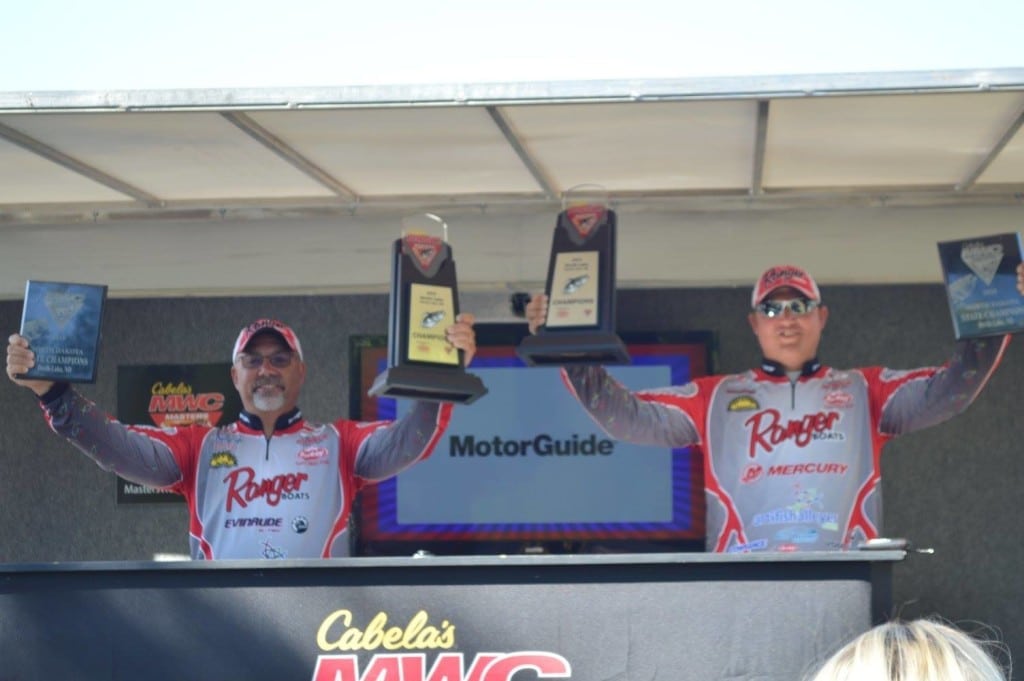 “This is an unbelievable feeling,” added Heiser. “This is our second season of spreading the word on fishing with artificial bait, and winning a major event like this is really a pinnacle in proving to people that you don’t need live bait to catch walleyes and be competitive.” 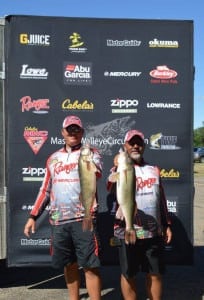 In March of 2014, Heiser and Morris swore off live bait and formed Artifishalleyes. They’ve since shown how a variety of artificial presentations such as Berkley Gulp! and PowerBait can outfish leeches, nightcrawlers and other traditional walleye bait choices.

Their winning presentation at Devils Lake relied on vertically fishing hard-bodied swimming jigs at the base of large rocks on steep breaks in 25 to 32 feet of water on East Devils Lake. Their efforts yielded a tournament-leading 34-pound, 13-ounce MWC-allowable 5-fish limit on day one, followed by a 22-pound, 4-ounce day two limit for a total weight of 57 pounds, 1 ounce.

The win was worth $18,780 including $10,600 in cash plus $3,400 from the option pot, the $1,000 Ranger Cup contingency, $500 Lowrance Electronics bonus, $200 Okuma award and a $1,000 Cabela’s National Team Championship Prize Package, which includes paid entry into the 2016 NTC, travel stipend, team jerseys and plaques. They also won $1,080 from the MWC Big Fish Pot and claimed the title of North Dakota State Walleye Champions, which comes with a $1,000 prize package including 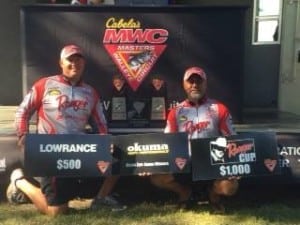 custom trophies, custom State Champions rings by Tight Lines Jewelry, a berth in the Cabela’s NTC, decals and a spot on the MWC website’s Wall of Fame.

A total of 650 walleyes weighing 1,685 pounds crossed the scale during the event, including 117 five-fish daily limits. Adding to the fun, more than 70 kids participated in a Youth and Family Fishing Clinic presented by the Cabela’s MWC, National Professional Anglers Association, Pure Fishing and Zippo Outdoor Brands and received free rod-and-reel combos courtesy of the NPAA.

Under the umbrella of The Walleye Federation (TWF), the Cabela’s MWC is open to avid walleye anglers from all walks of life. The 2015 schedule spans nine states and includes 11 regular-season qualifiers plus the 2015 World Walleye Championship.

Fishing with artificial bait since 2014, Morris and Heiser had a two-day total weight of 57 pounds, 1 ounce to win the 76-team tournament.

“This is our second season of spreading the word on fishing with artificial bait,” Heiser said. “And winning a major event like this is really a pinnacle in proving to people that you don’t need live bait to catch walleyes and be competitive.”

The win was worth $18,780 including $10,600 in cash. The Masters Walleye Circuit is held in nine states and includes 11 regular-season qualifiers and the 2015 World Walleye Championship.